Soaring on Wings of Science and Spirituality

Before we ponder into this intriguing topic, it’s of utmost importance to analyze the matter of overwhelming curiosity. As science has thick blanket of mathematical calculations, underneath this lies a thick blanket of mathematical calculations. As mentioned in the holy bible pertaining Adam and Eve. How they started their life by eating the forbidden fruit from the tree of knowledge. Adam started differentiating between himself and the material world.  Possessing an increased awareness, Adam and eve learned how to adapt to the environment, and how to exploit the resources of nature. Subsequent generations also developed skills of hunting and farming. The next leap was the emergence of metal tools, about 5000 years ago. Which proved to be crucial step in the development of industry? If we think back to the era of Greco Romans, a civilization from which the western world derived the basic structure on which modern science has made such a gigantic progress. Henceforth, the wise began to philosophies about the existence of man, and this gave birth to modern science.
In the fourth century, BC, Aristotle, the student of Plato, prescribed a formal structure for existing scientific knowledge, and introduced the concept of logic, which was reinforced by distinguished academicians such as Archimedes and Euclid, who made a remarkable contribution in the field of Mathematics and Astronomy. So where did religion fit into this picture?

Until the seventeenth century, the Christian church happily accepted Aristotle’s theories. They believed that man had been created in God’s image and was therefore his most noble creation. They adopted the view that earth was stationary while the sun and other planets moved around it in their respective orbits. The church also believed that their understandings of God could be enhanced if they looked beyond the earth’s atmosphere, and explored the regions of outer space. The great thinkers of the period thus employed themselves to search the stars and planets.

Science is a discipline that explores the physical nature of our existence and the world around us , as it is objective and therefore empirical in its approach. Spirituality has made a home for himself at the other end of the spectrum. Focusing on the ethereal aspects of our existence and its justification in this universe. It seems inevitable to me that our questions will remain unanswered until we build a bridge between the two.

I believe that the true quest for knowledge must encompass both the spiritual and the physical aspects of existence, and it is only when we begin to explore both of these that we begin to appreciate the significance of one against the other. Albert Einstein says : science without religion is lame, religion without science is blind. The statement highlights that both science and religion if separated are limited and must find a way to collaborate.

“science can never solve the ultimate mystery of nature. And that is because, in the last analysis, we ourselves are part of nature and therefore part of the mystery that we are trying to solve.

Religion and science are the two wings upon which man’s intelligence can soar into the heights. 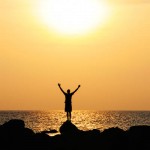 Next Story:
Tolerance through Soul Kinship