Science and god are generally considered anti poles. Some people ridicule God as a symbol of orthodoxy and backwardness. There are others who are curious to know God, but do not want to accept him without scientific facts and logical explanations.

A question arises: is scientific interpretation of God possible? If it is not possible, what are the reasons? And in absence of scientific tests, should we refute the hypothesis about his existenc. These questions generally come up while pondering over this topic.

A scientific interpretation of God is very difficult because study has different methodology compared to the one adopted by the seekers of spirituality. In every scientific study the three interrelated stages of facts, theory and logic are necessary. In the first stage, facts are collected from the field in the form of data. Thereafter, theories are derived from these facts through experiments, deductive logic and inductive reasoning. Finally, logical facts are established by testing the hypothesis with the help of statistical or mathematical methods.

On the other hand, spiritual seekers adopt a different methodology. Their study of God entails three stages of knowledge, devotion and faith. These three requirements are known as Gyan (knowledge) , bhagti (devotion) and vishvas (faith) in Indian philosophy, respectively. Knowledge may be gained by inductive reasoning and through a teacher (guru) . But one has to develop devotion and faith on his own. Bhagwad Gita suggests an easier method for the final stage. It is evident that two different paths. That is why , God cannot be tested scientifically.

Hence although God cannot be put to scientific tests, yet it does not mean that there is a great contrast between science and God. Science methodology is a long process and it may take scientists ample time to find God. So for the study of almighty, we need to adopt a different methodology involving a spiritual guide. 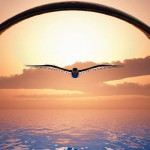 Next Story:
Soaring on Wings of Science and Spirituality